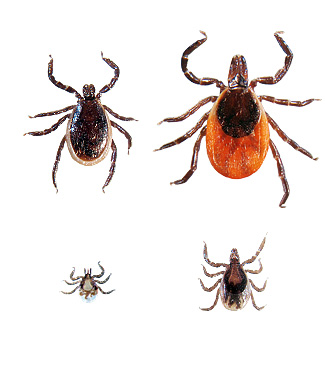 However in the last few years, a new adventure has arisen: bacteria. In the last few years, bacteria and viruses carried by ticks and other insects have required the need for additional attention, using modern-day eyes to fight illnesses that would have put our historical fore-parents down, stopping their traditional work and harming their homesteads.

Sarah Cooper of Columbia, MD knows these bacteria well. Unknowingly she was bitten by a tick while working at the Claude Moore Colonial Farm in McLean VA, while working as one of the 18th-century farmers. Her bad experience can guide to protecting your health and safety.

One November day, Sarah found a dessert-plate sized target shaped rash on her back. Although she always wore long 18th century petticoats, layers of clothes, and high socks as all the literature on preventing tick-borne disease had warned, Sarah knew that rashes were a a bad sign, so she went to an urgent care facility. She had no health insurance and she hoped that the urgent care doctors could diagnose her symptoms. The Lyme disease tests were negative; however Sarah came down with weeks of flu-like symptoms that laid her very low.

Little did Sarah know that new tick bites do not produce enough antibodies to show up as a “positive” for the Lyme tests.

Still ill longer than she expected for a typical illness, Sarah visited a different urgent care facility; this new facility doctor told Sarah that she never tested for Lyme when there is a rash and patients describe working or playing in woods-like or farm settings. She immediately put Sarah on 2 weeks of antibiotics. Sarah felt better soon, but within six months, the symptoms returned.

It’s been several years now; Sarah is still plagued with fatigue, exhaustion and other issues that developed during the initial Lyme illness. To this day she is still going to rounds of doctors seeking solutions. Said again: years later, Sarah – like many people affected by Lyme disease – is still affected by the after-effects of tick-borne bacteria that she received years ago. Although Sarah has switched to working at a different historical agricultural park, insect-related health issues happen: She was bitten by a spider within the last couple of weeks.

Lyme disease, Rocky Mountain Spotted Fever, (RMSP) and ehrlichiosis, are all carried by ticks, but different ticks. All of these diseases need at least several hours for an attached tick to release its bacteria; one source says that that bacteria that cause Lyme disease can be transmitted if a tick is attached for at least 24 hours. Lyme is common while RMSF is rare; yet Lyme Disease symptoms mimic a simple illness, yet possibly affect the brain, nervous system, eyes, joints, and heart. Often there are shooting pains, insomnia, and – as some report – an inability to read. Lyme Disease is most prevalent in the New England, Mid- and South-Atlantic, and Upper Midwest. (Canadian Lyme information is here.)

A good overview of tick-borne diseases – and how ticks plan their attack – is here.

Because we are all a family of living history specialists working most often at outdoor sites, Sarah recommends several easy precautions to counter the threat of Lyme disease. These precautions are:

View all posts by silhouettesbyhand