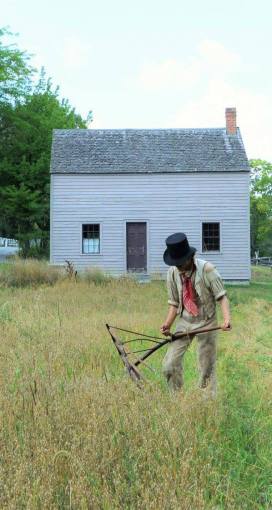 You can mark experiencing a “white hot” off your bucket list if you join us at the opening reception for the 2017 ALHFAM conference. But wait! Don’t dig in until you’ve taken the official tutorial on building a “garbage plate” or a “beef on weck” sandwich.

ALHFAM has gathered in many places for the annual conference, but never in western New York State at Genesee Country Village & Museum (GCV&M), the nation’s third largest living history museum. The Museum is named after the Genesee Country, the region west of Seneca Lake along the mighty Genesee River. Christened “Beautiful Valley” by native tribes, the Genesee Valley sits on the cusp of the Finger Lakes region just minutes from Rochester, NY, and is home to green fields and farms surrounding both urban and suburban communities.  In addition to the rich agricultural industries – apples, dairy, grapes, cabbage and corn – this area has cultivated a rich heritage of social and economic change.

The conference theme, “Breaking Through Barriers: Living History in Modern Times,” addresses the challenges faced by living history sites and interpreters working to convey the complexities of the past while navigating the hurdles presented by our modern world. For the last several years GCV&M has been breaking through its own barriers as it inspires excitement and curiosity about our past amid a growing audience. The 2017 ALHFAM conference will motivate attendees to overcome obstacles that may inhibit accessibility, communication, creativity, growth, or sustainability at their institutions and in their programming.

This year’s program features not to be missed opportunities including keynote speaker Dustin Growick, Audience Development Outreach Manager at Museum Hack. Growick will address tactics for supplementing lecture-based, dialogue-focused programming with a fearless, infectiously passionate voice that audiences can’t help but be attracted to. Since its inception in 2013 Museum Hack’s renegade band of museum-lovers has been at the forefront of rethinking traditional visitor experiences. Working with the mindset that visitors should savor works that resonate, rather than see it all, Museum Hack incorporates inquiry, storytelling, movement, challenges, and a little sass to put an alternative spin on museums. The folks behind the pioneering company are unapologetically head-over-heels in love with history, as are most museum professionals. The difference is relaxing traditional programming models to bring out the juicy bits that appeal to a wider audience.

In this same vein, the seminars being offered embrace challenging topics such as interpreting the sick and disabled, making younger (children) and older (seniors) generations part of the conversation, and reconciling reproduction items with curatorial collections. Of particular interest are those sessions focused on ground-breaking experiences at peer institutions; i.e., the implementation of engaging and educational theatrical presentations at Hawaiian Mission Houses Historic Site & Archives, and Fort Nisqually Living History Museum’s manipulation and inclusion of cultural fads. The Genesee County Chamber of Commerce discusses the development of provocative sites in ghost tourism, while GCV&M will spotlight its own out-of-the-box summer camp programming.

The presidential banquet will be hosted at one of Rochester’s trendiest hot spots – Village Gate Square – a renovated factory turned pseudo-urban mall, home to high-end eateries and indie mom-and-pop shops alike, all in the heart of the Neighborhood of the Arts (NOTA). Performances by Scottish pipe bands and Irish step dancers will highlight the city’s ancestry prior to the annual Presidential Banquet and the honoring of the 2017 recipient of the Schlebecker Award. These performers have been chosen in honor of the region’s earliest settlers, who made immeasurable contributions toward its development, and whose descendants have continued to maintain a strong community presence with nearly 16% of the Genesee Valley claiming Irish ancestry to this day.

Long before the Scots and Irish settled here, the Seneca, or “Great Hill People,” lived and prospered.  A member of the Haudenosaunee, an alliance of native nations united for hundreds of years by traditions and cultural values, their democratic ideals inspired the U.S. Constitution and women’s suffrage, as well as contributing to American cuisine and medicine. The Ganondagan State Historic Site and Seneca Art & Culture Center, just east of the City of Rochester, spotlights Seneca culture via living exhibits and demonstrations.  Featured among these are the Alleghany River Indian Dancers led by Bill Crouse, Hawk Clan, faith keeper of Coldspring Longhouse and Coordinator of the Seneca Language Department on the Allegany territory. This internationally distinguished troupe showcases traditional Haudenosaunee songs and dances in traditional regalia, and will perform as part of Tuesday night’s dinner at GCV&M.

Rochester was the gateway to the West when the Erie Canal opened in 1825, becoming one of America’s first boomtowns. In 1848, local citizens were at the forefront of the Women’s Rights Movement in Seneca Falls. Rochester was home to Susan B. Anthony and Frederick Douglass, as well as countless other visionaries. These people chose to break through barriers, working together to overcome the most insurmountable of obstacles and changing America in the process.

Did we mention we have J-E-L-L-O! The Genesee Country boasts many accomplishments, among them the invention and production of “America’s Most Famous Dessert” – J-E-L-L-O. The Jell-O Gallery, under the auspices of the LeRoy Historical Society, opened in 1997 in commemoration of the 100th anniversary of this jiggly creation, first introduced in 1897 by LeRoy resident, Pearle Bixby Wait. During Tuesday morning’s site visit explore a collection of original Jell-O advertising art, collections of recipe books, original molds and packaging, and the results of an EEG test that proves that Jell-O has brain waves!

Still a relatively young museum having only opened to the public in 1976, GCV&M is the largest and most comprehensive museum in NYS. In addition to the historic village, the 600-acre complex boasts a nature center and exhibit gallery, servicing nearly 90,000 visitors annually. Highlights include four active historic kitchens, more than ten demonstrated trades & domestic manufacturers, operational historic brewery, confectionery, heirloom gardens, recreated 19th-century baseball park, and the early homes of prominent area figures such as Col. Nathaniel Rochester and George Eastman.

Established by the museum’s founder, the John L. Wehle Gallery’s art collection unites his passion for art with his interests in hunting, sports, wildlife, and conservation. Spanning the 17th to the 20th centuries, the paintings, drawings, prints, and sculptures document the changing taste and styles of sporting and wildlife art. The art collection has been hailed by Wildlife Magazine as “one of the finest in the world.”

The Gallery also house the Susan Green Collection, nearly 3,500 rare 19th-century garments and accessories purchased from the eponymous American costume authority in 2010. Although there is some formal attire, the focus is on items once worn in everyday situations; clothing that rarely survives. Unusual, too, is the large representation of men’s, children’s and adolescent wear, found far less often then women’s clothing. All of it is in good condition with excellent provenance, and staff has the privilege of showing off a selection of pieces on a permanent rotating display of custom mannequins, pull-outs and built-ins. Antiques Roadshow’s Karen Augusta dubbed it, “a gem that stands alone as one of the finest collections of its kind in North America.”

In keeping with the Democrat & Chronicle’s christening him as, “one of the most dedicated conservationist in the state,” Wehle created a wildlife research center and preserve focused on environmental stewardship and the ecological history of New York State and the mid-Atlantic region. The Nature Center features more than ten miles of hiking trails and 175 acres of rich wildlife habitat traversing farmlands, woodlands, grasslands, meadows and wetlands. During the summer, this serves as the hub of the Museum’s summer camps. Energetic and engaging staff design memorable hands-on adventures in the museum’s Earth Camp that nurture children’s connection to the natural world. Potential explorations include building a fire with flint and steel, navigating the woods, reeling in the catch of the day and discovering what lives hidden at the bottom of the pond. Likewise, Summer Sampler, using the historic village as its unique setting, immerses children in 19th-century youth experiences. Walking on stilts, participating in a Civil War military drill, playing stool ball, and practicing sling shot skills are all included.

Stuart Bolger wrote in the museum’s first commemorative book in 1982: “Almost all who had come to make their way in the Genesee Country expected change.” The conference planning committee hopes that you, too, will be pleasantly surprised at all there is to see, do and learn in our region.  See you in June!

View all posts by debarenz