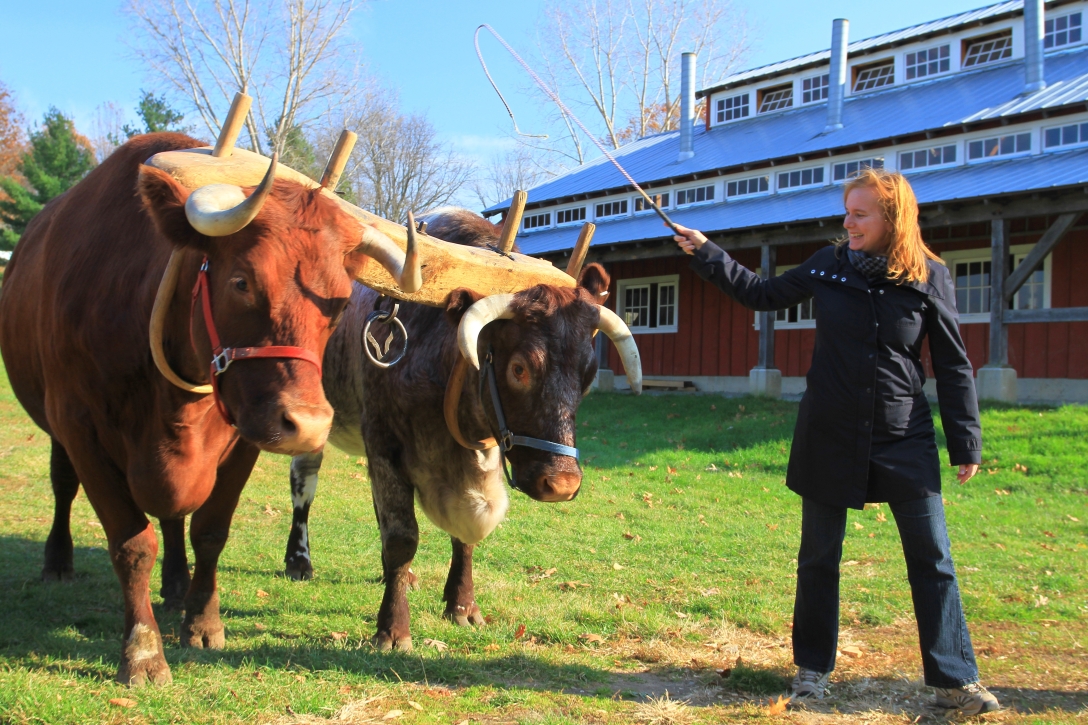 I’m certain that many of you agree that some of the best things about ALHFAM are those unique learning opportunities –: the chance to get your hands-on history, to learn about past trades, techniques and technologies–, more than you could ever experience from the printed page. In my role as a senior administrator, the “hands-on” part isn’t a regular aspect of my job, but as the person who oversees agricultural and living history programming at our site, I am always eager to learn more about the responsibilities of our front-line staff. 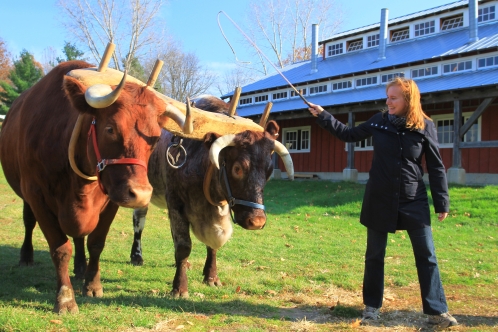 One such opportunity happened during an ALHFAM Board meeting that was held a few years ago at Tillers International . After a day of strategic planning, we had a chance to tour the campus, learn more about their courses and programs and get up close with resident oxen, Hershel and Walker. I was in awe of these gentle giants and the patience they seemed to show a rookie drover who hesitated a bit with her “gee” and “haw” commands. That 10-minute experience had me giddy with excitement, and to this day still ranks in the top 10 of my ALHFAM experiences. Upon my return to work, I promptly went to our Agriculture supervisor with the eagerness of a little girl asking for a pony, to see what it would take to get some get some oxen for our site.

As in many other regions in North America, oxen featured prominently in the settlement of Western Canada. Oxen were shipped to Canada from England by the Hudson’s Bay Company–; they pulled the carts of the Metis trappers and traders, the North West Mounted Police set upon their epic March West with 142 head of ox, and they were an essential provision for the intending settler, inexpensive to keep and well suited for breaking the harsh prairie soil. Our local archives abounds with fascinating photographs of oxen at work, pulling carts, and freighting supplies –: massive bull trains of 12-16 oxen were used to transport goods from the Missouri River system at Fort Benton, Montana to Southern Alberta. You see single ox and even teams paired with horses, breaking sod, hauling hay, pulling sleds or skids in winter, powering machinery from water drilling rigs to threshing machines. There are many scenes of oxen pulling wagons loaded with settlers’ effects, and even pulling carriages. And ox races were even featured as part of small-town sports day festivities.

Given their historical prevalence, oxen are surprisingly absent from living history presentations in Western Canada. Heritage Park had a team of highland steers in the late seventies, Pierre and Elliott, but they were never replaced. Despite my eagerness to reintroduce a team to our programming, there were many practicalities to consider–: oxen take a degree of specialized knowledge for their conditioning and care, there are considerations for housing, and ultimately should serve a practical purpose, all beyond what our turn-of-the-century mixed farm would represent. But part of my dream came true this summer through a collaboration with a nearby craft distillery who agreed to a one-month loan of their “spokes-oxen” – Lion and Bright.

Eau Claire Distillery is located in Turner Valley – a short drive southwest of Calgary, and it promotes a most-unique “farm to glass” mandate. Partnering with the Bar U Ranch National Historic Site (one of the hosts from the ALHFAM 2014 Annual Meeting) the distillery seasonally cultivates 25 acres of barley and rye using draft horses and historical farming methods. Last summer, Eau Claire acquired a team of oxen from Truro, Nova Scotia as a promotional tool for their Prickly Pear EquineOx (a sweet, barley based liquor) and have showcased the duo throughout the area.

For the month of August, Park guests will have a chance to see Lion and Bright around the Park. There will be yoking demonstrations and a chance to learn more about the role that oxen played in Western Canadian history. This is also a great learning opportunity for our Agriculture staff to expand their animal husbandry skills. The arrangement also provides some exposure for Eau Claire Distillery and will hopefully lead to other opportunities for collaboration.  Looking beyond our historical / museum networks, where else can we find these kindred spirits to help advance our goal of preserving and presenting our agricultural past?

Susan Reckseidler is the Manager, Interpretation at Heritage Park Historical Village in Calgary, Canada and current Vice-President of ALHFAM.

View all posts by sreckseidler