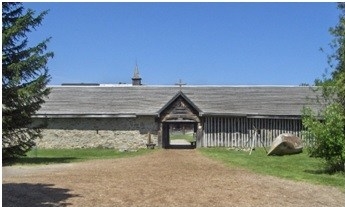 The Jesuit priests could be found at various villages of the Wendat on any given day, conducting services, and teaching and preaching Catholicism with the help of various Donnes who signed contracts with the Jesuit order for work in exchange for food shelter and clothing.

In the later years of Sainte Marie, an increasing threat from the Iroquois in Wendat territory began to make its mark. This threat was compounded by a drought and crop failures. The increasing effects of disease began to weaken the Wendat to the point where the Wendat confederacy not only lost its people but its overall strength as well.

During the spring of 1649, Fathers Jean de Brebeuf and Gabriel Lalemant lost their lives to Iroquois attack and torture, and their bodies were returned to Sainte Marie by several Donnes for burial. Donne and Shoemaker Christophe Ragneoult described the condition of the bodies. He reported that one of tortures might well have been a mock baptism with boiling water.

The Wendat, fearing more attacks, prepared to head north to safer territories, but the Jesuits convinced the Wendat leadership that a journey north to Manitoulin Island was too far and very dangerous. It was decided that all would leave, both French and Wendat, and head to the nearest island some twenty-five miles distant to establish a new mission there. But before they left, they decided to destroy Sainte Marie by fire.

This was a very difficult decision for all to make, as the Jesuits and the workers had put ten years into the building process. Father Paul Ragueneau stated, “And thus in a single day and almost in a moment we saw our work of nearly ten years consumed by fire.” The feelings and emotions of the men who labored to build the mission can only be imagined.

The French and Wendat attempted to reestablish the mission community of Sainte Marie but the Jesuits only remained in the territory for one more year. Crop failure and starvation proved to be too difficult to overcome, and the Jesuits decided, after much debate, to return to Quebec. They extended an invitation to the Wendat to journey back with them and settle in Quebec. Some 500 to 600 agreed, and the remainder, barely a thousand, promised to join them but never did. They instead joined another group known as the Petun, who abandoned the territory and travelled west, ending up in Kansas to become what is now known as the Wyandot.

With the mission of Sainte Marie gone and the peoples dispersed, the grounds that Sainte Marie was built upon stood empty. Early settlers in what is now Simcoe County knew that there was something of significance at this place, and they called it “the old French ruins.”

In 1855 Jesuit priest Felix Martin conducted very minor excavations of the site and found several artifacts, one of which was a seventeenth-century trade axe. Kenneth Kidd conducted more in-depth excavations for the Royal Ontario Museum in Toronto in 1941. His work continued until 1943, when funding for his explorations ran out. Work continued later between the years 1947 to 1951 by Wilfred Jury, the curator of the Museum of Indian Archaeology, University of Western Ontario.

Work began in earnest on the reconstruction in 1964, continuing under the direction of Wilfred Jury until 1967, when the work was completed. Even during excavations, visitation by the public was common place.

There have been many changes at today’s Sainte Marie among the Hurons. The beginnings of the interpretive program took shape early in the very early 1970s with the introduction of interpreters in period clothing. An agreement was reached with our neighbor, the Martyrs Shrine, which stands on a hill directly across the highway from us. It was agreed that young Jesuit novitiates would don the long black robes of the Jesuit and interpret to the masses of people that began to come through the gates.

Interpretations of the reconstructed site expanded and improved with ongoing investigations in areas that dealt with the physical buildings as well as the original personnel that inhabited Sainte Marie. This included research that included lifestyles, biographical information on the men, and aspects of their daily lives, such as what they wore from day to day.

A giant step for Sainte Marie’s interpretation program came in the form of its Indigenous program. A multi-talented man named Bill Parker from the Algonquin tribe was hired, and he was able to use archaeological finds as sources for recreating early Huron pottery. In 1984 several Ojibway women were hired to be seasonal interpreters in full period clothing. These women became the basis for the programs we have developed and built over the years since.

Today we are pleased to have an average of 27,000 school students visit us yearly, with an average general public visitation of 75,000 people from all parts of the globe. 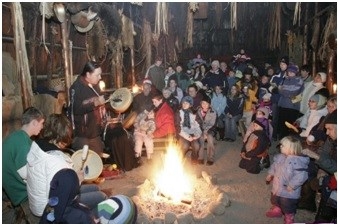 Your visit will include free-flow touring as well as some in-depth special presentations that may include traditional fire-starting techniques to our very own ALHFAM people doing sessions right on site.

An evening program with a sleep-over will be part of our program, with some traditional foods from the time period and a chance to enjoy some friendly conversations about our history both past and present and, indeed, some spookiness.

The incredible story of Sainte Marie among the Hurons was then and continues to be a big attraction. People have come from all parts of the world to see and experience this part of Canada’s early history. Visitors have included many important people over the years from Pope John Paul II in 1984 to famous actors like James Avery (Uncle Phil of Fresh Prince of Bel-Air) and even royalty.

And now the most famous of all: ALHFAM in June 2019! Welcome to a Rendezvous in Time!