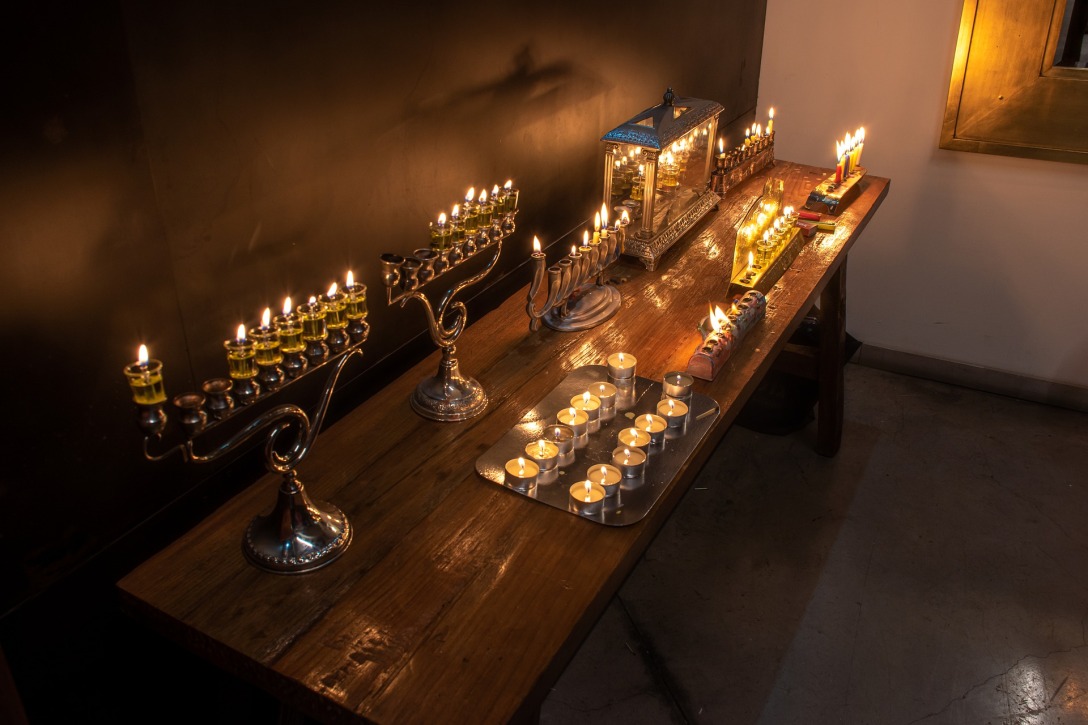 Hanukkah:  The Festival of Lights

In the time of the second temple there was a period, when a heathen king, by the name of Antiochus of Syria, had nearly abolished the observance of our religion….At length the Jews, led on by the valiant Judas Maccabaeus, drove the Syrian army out of the land; and when the people again consecrated the temple they instituted a festival, called Hanukkah, or the Consecration, and ordered that for all future periods lamps should be lighted in our synagogues and dwellings, commencing from the evening of the twenty-fourth day of the ninth month….[1]

For most non-Jews, Hanukkah (also spelled “Chanukah,” meaning “dedication”), along with Passover, is probably the most familiar of the Jewish holidays. There is no mention of Hanukkah in the Torah (Five Books of Moses) or the rest of the Jewish Bible [2]; it is a holiday that is first discussed in the Talmud.[3]  Other than that Hanukkah is celebrated around the same time of year, it has absolutely no relationship to Christmas: it commemorates a great military victory and what was taught by the ancient rabbis was a great miracle.

The great military victory was the defeat of Syrian Greeks and their king, Antiochus, who sought to Hellenize the Jews of Palestine, by the followers of a Jewish priest named Mattathias and his sons, the foremost of whom was named Judah the Maccabee. Under Judah’s leadership, the Temple in Jerusalem, which had been used for pagan worship by Antiochus and his followers, was cleansed and rededicated, and the lamps relit. The celebration lasted eight days, patterned on the festival of Sukkot,[4] which the Jews could not observe properly at the proper time because of the uprising. This is the story that can be found in the First and Second Books of Maccabees, which are not part of the Jewish Bible but were preserved by the Christian church, and in Josephus’s History of the Jews.

The great miracle focuses on the oil used to light the lamps. Jewish tradition, as written in the Talmud, teaches that the Maccabees found only enough pure oil for one day’s worth of light, but through a miracle, this oil lasted for eight days. Thus, the holiday of Hanukkah, commemorating both the military victory and the miracle, lasts for eight days. The primary ritual associated with Hanukkah is the lighting of the eight-branched candelabra called a “Hanukkah menorah” or a “hanukiyah,” meaning the special menorah for Hanukkah with nine branches[5] instead of seven. Either candles or wicks with oil can be used, and one light is added each night, accompanied by several blessings, until eight are lit on the last night. The purpose of the ritual is to publicize the miracle of Hanukkah, and very often Hanukkah menorahs are placed near windows so that passersby can see the flames.

Along with the lighting of the candles comes an exchange of gifts as well as the playing of games. Traditionally, children are given money for Hanukkah, but, beginning in the early 20th century, especially in the United States, gift-giving took on greater significance because of Chanukah’s proximity to Christmas. The most popular game associated with Hanukkah is that of dreidel (a Yiddish word meaning “top”).[6]

It is important to understand that, in the scheme of Jewish holidays, Hanukkah is a minor festival. There are no restrictions on work, as there are for Rosh Hashanah, Yom Kippur, or Sukkot. There are no special services on the first days or last days of the holiday, nor is there any special liturgy, aside from a small addition to the prayers that are regularly said on weekdays and Sabbaths. The significance of Hanukkah for Jews in today’s world revolves around the importance of religious freedom and expression, the meaning of oppression, as well as pride in a great military victory against oppression. The fact that its observance coincides with the Christmas season has made the holiday more visible to non-Jews and has also increased the gift-giving aspects of the holiday far beyond what was ever observed even a century ago.

Your father is Very full of buissness I never knew the benefit of the Sabath before but Now I am Glad when it comes for his Sake that he may have a Little relaxation from that Continuall Hurry he is In….[7]

The Sabbath (“Shabbat,” in Hebrew) is a holiday that comes every week, beginning on Friday at sundown and ending about 25 hours later. It is the Jewish day of rest, and a day of celebration as well as one of prayer. It is marked by festive meals, singing, attendance at Shabbat services at synagogue, study, and, in general, refraining from one’s usual work, shopping, or other similar activities. Its end is observed by a ceremony called “Havdalah,” (separation), which separates this special day from the regular days of the week.[8] For many Jews, no matter what their level of observance, the arrival of Shabbat at the end of a busy week means a day to slow down and leave the pressures of the previous week behind.

[2] For a discussion of the Jewish Bible, the books it includes and their order, see Wikipedia, “Hebrew Bible,” http://en.wikipedia.org/wiki/Hebrew_Bible (accessed December 7, 2020).

[3]“The Talmud  is a commentary on the Mishnah, a third century compendium of Jewish law. It’s mostly composed of the quoted traditions of hundreds of rabbis from the first to fifth centuries, organized into topical discussions that frequently proceed associatively, rather than systematically.” https://www.myjewishlearning.com/article/talmud-words-and-phrases/ (accessed December 7, 2020). See also Wikipedia, “Talmud,” https://en.wikipedia.org/wiki/Talmud (accessed December 7, 2020), for an extensive discussion of the Talmud, its history and structure.

[4] See “It’s Not the Jewish Christmas: An Introduction to Jewish Holidays and Their Observance in North America, Part I,” https://alhfam.blog/2020/09/15/its-not-the-jewish-christmas-an-introduction-to-jewish-holidays-and-their-observance-in-north-america-part-i/ (Accessed December 7, 2020).

[5] The ninth light is the “helper” light, as the other 8 lights are not kindled directly by a match.

[6]To play a virtual game of dreidel, go to http://www.torahtots.com/holidays/chanuka/dreidel.htm (accessed December 7, 2020).

Martha Katz-Hyman is currently ALHFAM’s Communications Manager and also served as an ALHFAM board member as well as program chair for the 2001 and 2015 Annual Meetings in Williamsburg, VA. She has worked for many historical organizations, including Colonial Williamsburg and the Jamestown-Yorktown Foundation and is now an independent curator working with historic sites on the East Coast. She is the co-editor of The World of a Slave: Encyclopedia of the Material Life of Slaves in the United States.