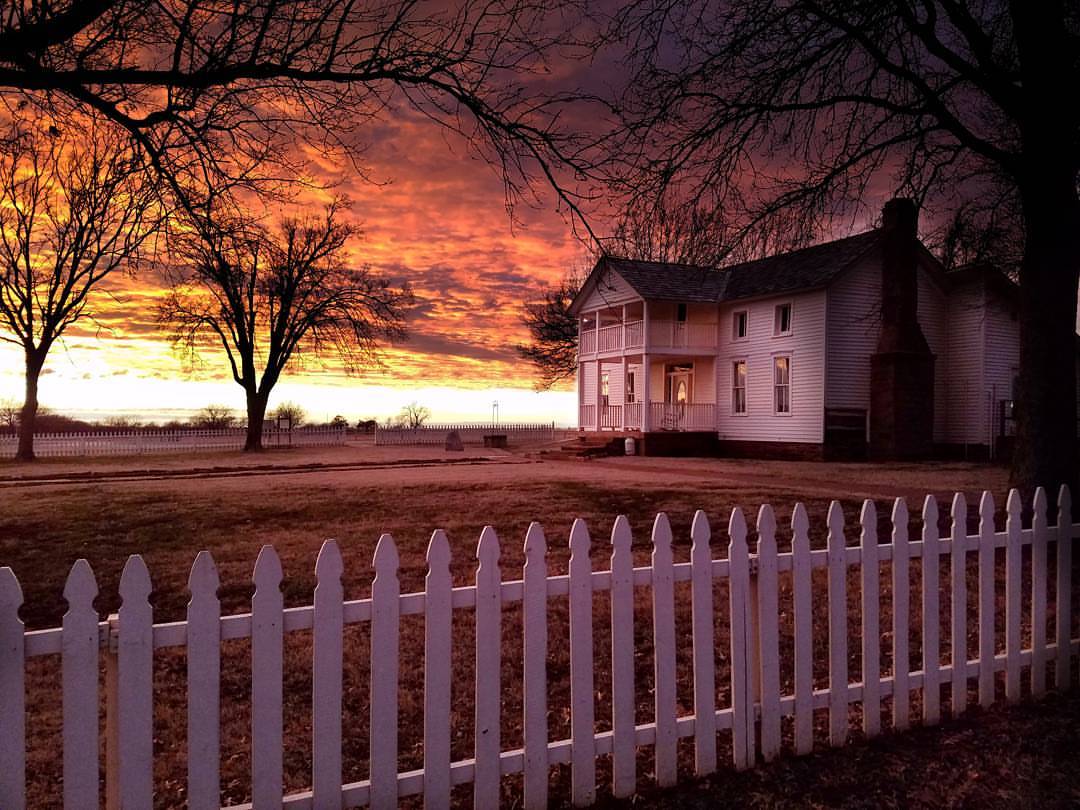 On the final day of the 2018 ALHFAM conference one of our final stops will be the Will Rogers Birthplace Ranch near Oologah, Oklahoma. As the name suggests, the ranch is the birthplace of famed cowboy humorist Will Rogers. However, well before Will Rogers was entertaining the country on stage, in newspapers, over the radio, or in movies, his father, Clem Rogers, had made a name for himself as a successful rancher, businessman, and politician, and this white Greek-Revival style ranch house was the center of the Rogers’ family life.

Clement Vann Rogers was born in 1839 in Indian Territory. Even in his youth, Clem was known as stern, independent and hardworking. His father, Robert Rogers, died in 1840, leaving Clem and his mother, Sally Vann, to care for their small family farm. Clem attended a local Baptist mission school and later attended the Cherokee Male Seminary in Tahlequah for a few semesters. However, Clem was more interested in starting his own ranch than he was in going to school. In 1855, when he was sixteen, he was hired to help drive a herd of 500 longhorn steers from Indian Territory to Kansas City, and Clem Rogers quit school for good.

Clem set up a ranch and trading post along Rabb’s Creek. However, it wasn’t long before the Civil War broke out, and the homestead was abandoned when Clem enlisted as an officer with the 1st Cherokee Mounted Rifles volunteer regiment and his wife, Mary America Schrimsher Rogers, left to stay with her family. By the end of the Civil War, the ranch was gone. Clem set to work rebuilding his herd, and by 1870 the family was back on a ranch in a new location. Clem and his former slaves, Rabb and Huse, began building the ranch house that came to be known as the “White House on the Verdigris” in 1873. By the time Will Rogers was born in 1879, the Rogers’ Ranch was more than 60,000 acres with nearly 10,000 head of longhorn cattle.

In 1889 the Missouri Pacific Railway bisected the Rogers Ranch, creating east and west sections. The railroad also brought settlers. Though the land within the Cherokee Nation was collectively owned by the Cherokees and leased by individual tribal members, white settlers started showing up. This was the end of the Rogers Ranch as it once was. By the late 1890s, through the Curtis and Dawes Acts, the federal government would take the land collectively owned by the tribes, and individually allot land to tribal citizens. The Rogers Ranch was reduced to about 140 acres with Clem and Will Rogers’ allotments. Clem was able to buy land around him reaching nearly 2,000 acres, but the ranch would never be what it once was.

Clem Rogers eventually moved into Claremore, served as a vice president in the new First National Bank, opened a livery stable, and was a part owner of the Sequoyah Hotel. In 1898 he put his young son Will in charge of the Rogers’ Ranch. Will renamed the ranch the “Dog Iron,” after his cattle brand, but by 1902 Will had moved on. The ranch was operated by tenant farmers, and the house fell into disrepair. By the late 1920s, Will Rogers had become an international superstar. He bought his sister’s share of the ranch and put his nephew, Herb McSpadden, in charge. The McSpadden family revived the ranch and lived in the ranch house until 1960, when the house was divided into two pieces and moved to the top of the hill where it now sits to save it from the flood waters when the Army Corps of Engineers dammed up the Verdigris River to create Oologah Lake. Since that time, the Rogers’ ranch house has been open to the public as a historic site so visitors from all over the world can visit the birthplace of Will Rogers.