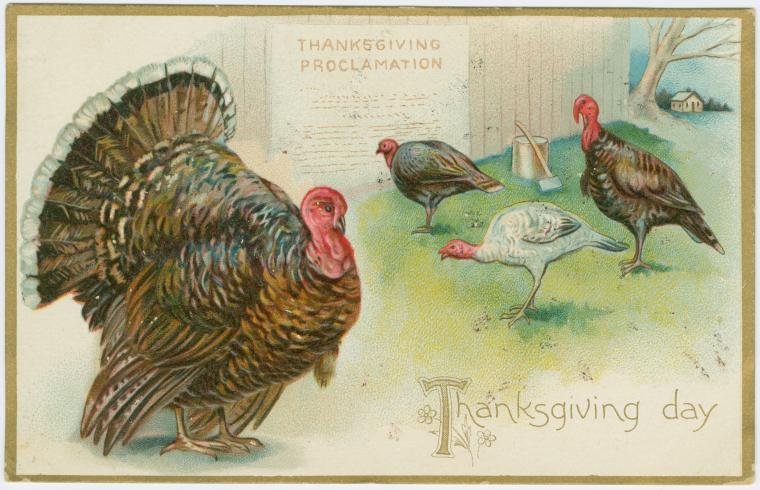 As Thanksgiving and Christmas holidays approach in the United States and Canada (Canadians celebrated Thanksgiving on October 11, 2021), thoughts in the United States often turn to the traditional centerpiece of the Thanksgiving meal: turkey. To add a sense of history, as well as enjoy delightful flavors, you and your museum visitors may wish to go to the extra effort and procure or raise heritage turkeys. Or you may wish to present programs that focus on the history of Thanksgiving over the past two centuries, including what was offered on the table. But what is a heritage turkey?

Definition of a Heritage Turkey

All domesticated turkeys descend from wild turkeys indigenous to North and South America. They are the quintessential North American poultry. For centuries people have raised turkeys for food and for the joy of having them.

Many different varieties have been developed to fit different purposes. Turkeys were selected for productivity and for specific color patterns to show off the bird’s beauty. The American Poultry Association (APA) lists eight varieties of turkeys in its Standard of Perfection. Most were accepted into the Standard in the last half of the 19th century, with a few more recent additions. They are Black, Bronze, Narragansett, White Holland, Slate, Bourbon Red, Beltsville Small White and Royal Palm. The American Livestock Breeds Conservancy also recognizes other naturally naturally-mating color varieties that have not been accepted into the APA Standard, such as the Jersey Buff, White Midget and others. All of these varieties are Heritage Turkeys.

Heritage turkeys are defined by the historic, range-based production system in which they are raised. Turkeys must meet all of the following criteria to qualify as a heritage turkey:

1. Naturally mating: The Heritage Turkey must be reproduced and genetically maintained through natural mating, with expected fertility rates of seventy to eighty percent.

3. Slow growth rate: The Heritage Turkey must have a slow to moderate rate of growth. Today’s heritage turkeys reach a marketable weight in twenty-six to twenty-eight weeks, giving the birds time to develop a strong skeletal structure and healthy organs prior to building muscle mass. This growth rate is identical to that of the commercial varieties of the first half of the twentieth century.

Beginning in the mid-1920s and extending into the 1950s, turkeys were selected for larger size and greater breast width, which resulted in the development of the Broad Breasted Bronze. In the 1950s, poultry processors began to seek broad-breasted turkeys with less visible pinfeathers, as the dark pinfeathers, which remained in the dressed bird, were considered unattractive. By the 1960s the Large or Broad Breasted White had been developed, and soon surpassed the Broad Breasted Bronze in the marketplace.

Today’s commercial turkey is selected to efficiently produce meat at the lowest possible cost. It is an excellent converter of feed to breast meat, but the result of this improvement is a loss of the bird’s ability to successfully mate and produce fertile eggs without intervention. Both the Broad Breasted White and the Broad Breasted Bronze turkey require artificial insemination to produce fertile eggs.

Want to read the rest of this article? ALHFAM members can access the full text of this and thousands more through the A.S.K. database. Not a member? Join today!

This article first appeared as: